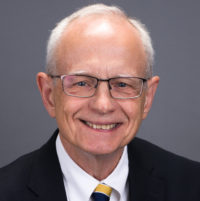 Professional Background: Dr. Carter served as pastor of Faith Presbyterian Church in Birmingham, AL, from 1986 – 2016. He has taught as an adjunct professor at the University of Alabama at Birmingham, Birmingham Theological Seminary, Beeson Divinity School, and both RTS-Jackson and RTS-Charlotte. Dr. Carter and his wife have made over ten overseas mission trips together, and they love encountering God’s people from other cultures.

Philosophy of Education: I believe that Christian Education can be thought of in terms of creation and redemption. It should be carried out view a view to carrying out the creation mandate of Genesis 1: “be fruitful and multiply and fill the earth and subdue it, and have dominion”. As fallen image bearers of God we must subdue the creation of God for the glory of God. It also is about redemption – not just redemption of lost image bearers of God, but also of the physical and social systems and authority structures on this fallen earth. We are to seek to roll back the impact of sin wherever see come across it. That requires thought and education.

I believe that students are fallen image bearers of God. As such, they have enormous potential and enormous limitations. I view the role of the teacher as one who is to impart both information and methods, and also to stimulate the student to self-directed study and inquiry. A teacher must seek to generate enthusiasm for the topic as well as impart information about the topic. If I teach a student everything so well that he or she scores perfectly on every exam and paper, but the student never again pursues the topic after the class is over, then I have to some extent failed.

Further, since I believe that all truth is God’s truth, then to become educated is to learn to think like God, i.e. to think God’s thoughts after him. Ultimately, there is and cannot be any conflict between religion and science since God made and controls everything that the scientist investigates.