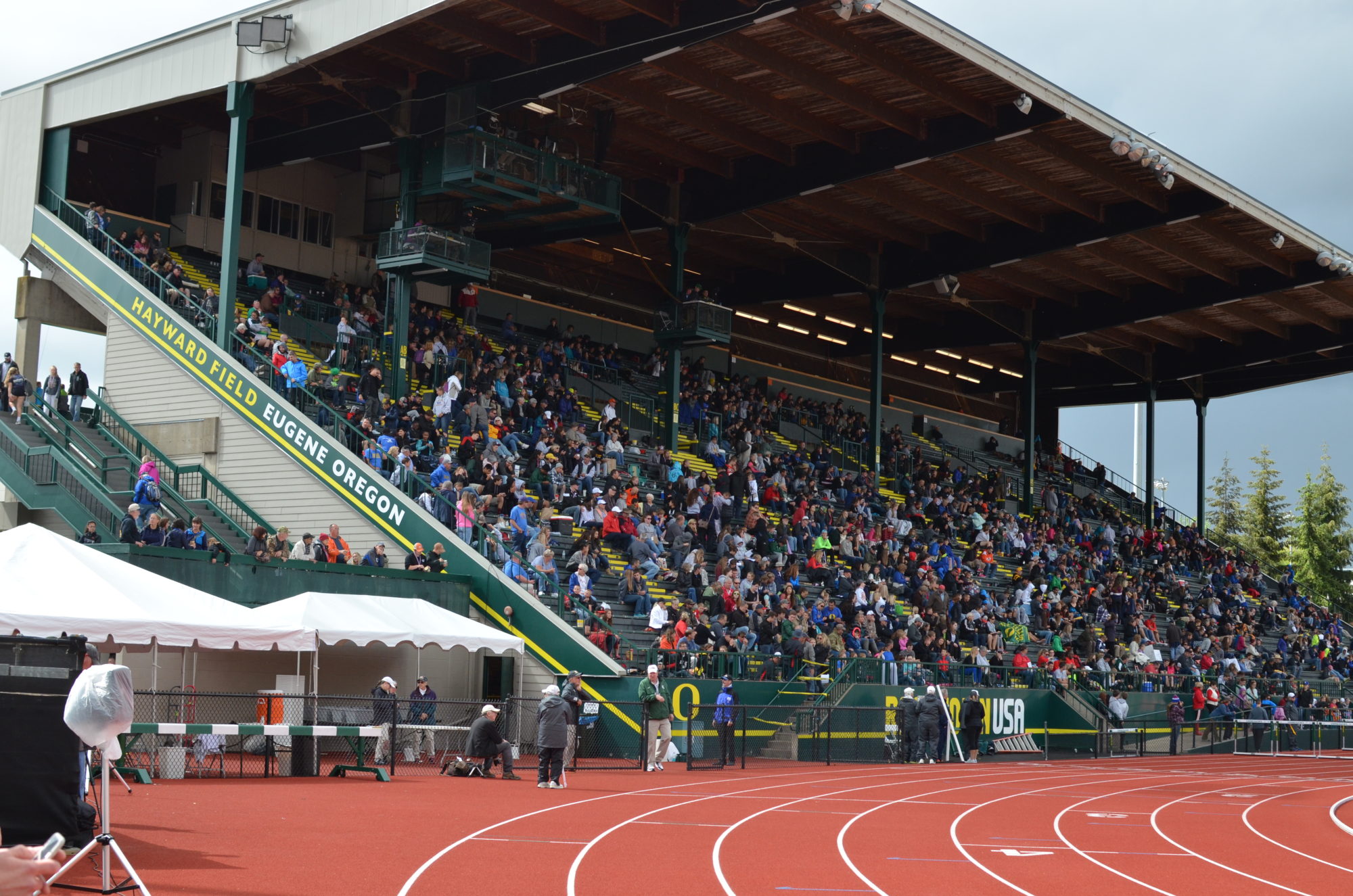 Posted at 08:55h in Recent by Camrynne Six
Share

​In truly dramatic fashion, St. Stephen’s Academy Archer (and fiery redheaded warrior princess!) Sydney R. (11th grade) dominated the sprint events at the 2017 OSAA State Championship Track & Field meet in record-breaking style, winning gold in the 200m dash and silver in the 100m. After advancing readily through the preliminary round on Thursday, Sydney was faced with familiar opponents from the 2016 state meet where she had finished 3rd in the 100m dash. As the afternoon finals round started on Friday, Sydney anchored the 4×100 relay team to a season-best 54.91, finishing 8th. 90 minutes later, Sydney was in the blocks for her 100m finals. The gun sounded, and a short 12.87s later, the Archers junior had secured silver in the 100m with a personal best, only the 2nd time she’s ever broken 13.0s.

Of note, she finished 2nd to a runner from Monument. This same rival won the 200m championship in 2016 in a race where Sydney finished 4th.
But 2017 would be different.

Almost two hours later, the meet officials walked 8 girls out for the 200m final from under the Hayward stands to the cheers of their teammates, parents and supporters. Sydney was seeded 4th based on her performance at Districts last week; two of the girls in this final beat her in 2016, including the aforementioned 2017 100m winner from Monument who was favored to repeat in the 200m this year. As the athletes walked around the track to the 200m starting blocks in the farthest corner from the Archers cheering section, who knows what was going through Sydney’s mind?  It was unlikely that she would follow Coach Storm’s oft-joked instructions for the Archers girls to pound their biceps, look around at their competitors and say “Who’s running for second?”  Instead, she settled into the blocks for the gun. A clean (and trademark slow) start had Sydney running in 5th at the 100m mark, rounding the Bowerman Curve. This is where Sydney started to fly, as she has done so many times before. She accelerated past the other competitors down the straightaway with no outward strain, just smooth, elegant, unadulterated speed. With 10m to go, Sydney was in 2nd and a blink later, she was leaning at the line in a photo-finish. Archers faithful waited breathlessly; it was impossible to tell who had won. A seeming eternity later, the first name popped up on the Hayward scoreboard:  “1. S. Radigan STSA 26.16.”  2nd place was 26.18, a hairsbreadth difference of 0.02s!  Archers young and old erupted in a roar as they flooded the stadium steps to run to the medal stand for the awards ceremony. As they clambered up the stairs to the concourse, they heard the track announcer say, “A new meet record!”

It’s traditional at the State meet for the coach of the winning athlete to award the medals to the top 8 runners on the podium. As Sydney climbed to the top of the 200m podium stand, she was greeted by her mother, Archers Assistant Coach, Shannon Radigan. Storybook ending, folks. Fade to black… or red.
========
That story alone would have made for a great time at the State Championships, but Sydney’s heroics were not all the Archers had to cheer for at the State meet. Moving back to the events of Day 1, the Archers sent 8 athletes down to the OSAA State Championship Track & Field Meet. These Archers were targeting 7 individual events and 2 relay events. The Archers’ Day 1 started at noon with a historic performance in the finals of the 3,000m run. Kendall T. (12th) was the first-ever Archer to make it to State in this event for boys or girls and she was seeded 3rd in a field of 12. The defending champion from Joseph was seeded 50 seconds faster so this would be a race for 2nd. As the 7.5 lap race progressed, Kendall maintained a strong 3rd place behind the younger sister of the 1st place Joseph runner. In the final 150m, the sisters pulled away to finish a heartwarming 1-2, while Kendall crossed the line with a broad smile, setting a new PR and school record by 5 seconds with a bronze medal finish of 11:25.13. It was a smart race, a tough race and a great way to finish Kendall’s competitive running career. Kendall’s finish in the 3k made Kendall the first Archers girls’ distance runner in the history of the school to place top 3 at State.

Also on Thursday, the other individual event Archers faced a prelim round in order to advance to Friday. Gresham B. (11th) (400m and 300m intermediate hurdles) and Josh W. (10th) (110m high hurdles), like Sydney, had to run in the preliminary rounds of their events. As the Thursday afternoon session wore on, the momentum and excitement were building as each prelim event ran and each time, the Archers advanced. By the end of Day 1, All Archers at State advanced in all events through the Preliminary round to the Finals, the first time that’s happened since 2015 when both State Archers (Brandt Bergeron and Ruth Meeker) moved on.

In the Finals round, Gresham finished 8th in his 400m race but ran very well in the 300m hurdles with a new PR of 42:54, good enough for a 5th place podium finish. Fellow hurdler Josh placed 8th in his final heat of the 110m high hurdles to also make the awards podium.

It’s unusual for freshman runners to move into HS competition and make it to State but Archers freshman Annaliese O. (9th) qualified in the 800m run. Her first trip to Hayward Field was not without incident. Seeded 7th of 12 in a strong girls field, Annaliese was trying to run against the fastest competition she’d ever faced. She ran a strong strategic race and was fighting to hold the 9th position coming down the homestretch. At the last 10 meters, the 8th place runner collapsed to the track at the limits of her endurance, right in front of Annaliese. The freshman distance Archer had the presence of mind to avoid the fallen competitor and still achieve a significant new PR in the 800m run, finishing in 2:36.65.

The 4×100 Girls Relay team had two first-year runners – Emma M. (10th) and Hannah H. (9th) – who had never been to Hayward field. They joined veterans Elizabeth T. (12th) and Sydney in the 4×100 relay on Friday and ran to a season’s best 54.91 to finish 8th overall. A fine effort, resulting in a podium awards ceremony.

The 4×400 Girls Relay team of Hannah, Kendall, Sydney, and Annaliese took the track in golden rays of the setting sun on Friday, about 40 minutes after Sydney’s record breaking run in the 200m. While the Archers distance relay team was exhausted and didn’t run their best time, their persistence and courageous effort was rewarded nonetheless. After taking the baton handoff from Hannah for Leg 2, Kendall continued in her lane to the 500m mark of the race where the runners can legally move to the rail for the remainder of the 1600m race. The competitor on Kendall’s outside dove to the inside sooner than legally allowed, cutting off Kendall’s progress. In addition, during Annaliese’s anchor run, another team’s baton hand-off went awry and both girls went down to the track in front of Annaliese. No doubt thinking deja vu, Annaliese diverted sharply to the outside lane to start her 400m leg. After the race ended and the track officials reviewed the lane cut-off incident, the 4×400 Archers girls were awarded 8th place, completing the unprecedented achievement for the Archers Track Program:

Every Archer who qualified for State in an individual or relay event resulted in a podium (top 8) finish!

Head Coach Joe Storm and Assistants Joel Williams, Shannon Radigan, Elicia Hickey, and Tim Tsuei are overwhelmed by the results of the State Championship Meet. This team has faced significant weather challenges at the vast majority of practices and at meets. It’s difficult for so many first-time runners at State to not be overwhelmed by the very large venue and the logistics of the State meet. Coaches’ expectations were blown away by the maturity and performances of the team.

Coaches also want to thank the Archers team for their exemplary behavior while traveling and staying in the team hotel Thursday night. Besides the State qualifiers, Archers Colton S., Christian T., Caden S., Emelia C., and Evan T. were supportive and inspired to work hard to make it back to Eugene as competitors in 2018. It was also very special to have Archers Track alums Emily Southgate, Ruth Meeker and Brandt Bergeron in the stands supporting the Archers.

A very special word of thanks to our tri-captain Jane S. (12th). As an alternate in the 4×400 relay, she had to remain ready to run, if needed, but in the meantime, she made it her personal quest to acclimate the first-time runners to the environment at Hayward by taking them to the warm-up fields, practice tracks and running with them during the open track time. She warmed up with several runners and was a calming influence on the team throughout the two day meet. She was focused on her teammates and exemplary of what the Archers team needed from their captain. The coaches genuinely appreciate Jane’s leadership, not only at this meet but throughout the season.

In the 2017 Oregon State Championship Track meet, St. Stephen’s Academy Archers clad in green made frequent appearances on the awards podium. But the brightest star of all was an Archer with red hair flowing behind her as she sprinted past with a smile. Great job, Sydney!  Great job, Archers!  What a great 2017 season this has been!