Posted at 07:50h in Recent, Uncategorized by Camrynne Six
Share

After 1A St. Stephen’s Academy made an unexpected run into the State Championship Cross-Country meet in 2018, the Archers from Beaverton ended up placing 2nd in the State meet, runners-up to two-time champions Cove High School.  Prior to 2018, the Archers men had only qualified an individual runner one time in the eight-year history of the program, so qualifying a team was a big step forward. Head coach Tim Tsuei joined the program in 2016: “Sending a team to the State meet last year was so important for our program.  Runners got a taste of that experience and came back this summer ready to go for more.” As 2019 senior co-captain Colton Six recalls, “The moment when I realized we got second on a team where none of the top five runners were seniors was awesome. It showed me we could do something even greater in 2019.”

The 2019 men’s team returned leading runners senior Aiden Smith, junior Seth Bergeron, and sophomore Colin Friend along with Colton Six and Luke Williams from the 2018 State runner-up team.  The 2019 women were able to field a team of five, led by returning runners, senior Annaliese and sophomore Olyvia Oeverman. An unprecedented roster of 15 athletes was assembled from the St. Stephen’s high school student body of 51.  Building on this core, the Archers attacked their summer training with motivation and clear goals, but perhaps the most meaningful summer event was the first ever XC team retreat. The Archers ran together, swam in the Willamette, attended a baseball game, and did their second annual run across five of Portland’s bridges.  The athletes convened their own session where they verbalized and documented their individual and team goals for the coming season. This team culture of accountability, motivation, and commitment was exemplified in the student-led workout schedule throughout the season. This team only meets with coaches three times a week for prescribed practices of duration and intensity.  Three other times during the week, the team meets in small groups without coaches, or works out individually to build speed and endurance. 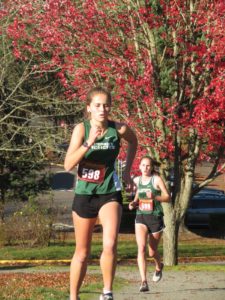 In September, the Archers started the 2019 season with a bang, winning men and women’s team titles at the first two 5k meets of the season.  The men collected another two meet titles in October before prepping for the Districts meet on November 1 at Tualatin High School. When asked about the challenge of having a small team, Olyvia Oeverman said, “To an outsider, having a team of five might sound pretty tough. But I believe having five members of the team this year actually contributed to how successful we were; it puts responsibility on each and every girl, and a constant mindset of, ‘My 100% effort is completely vital for this team’s success.’ ”

Headed into Districts, the men’s team was heavily favored to repeat as champs, but the women were only projected to finish 5th. Women’s teams had to finish in the top 3 to qualify for state, so this would be a formidable task.  Under a beautiful autumn sky, the Archers women rose to the challenge, erasing the projected deficit of 25 points to not only break into the top 3, but secured the 2nd place finishing spot to stamp their ticket to the State meet in Eugene.  Coach Tsuei said, “We were really pushed over the top by our 3-4-5 runners as they all set personal and course records of 2-3 minutes. We managed to leapfrog into the runner-up spot and now these young women get to fulfill a dream they never even dared to dream.”  Meanwhile the men dominated Districts, scoring fewer than 25 points and finishing 1st, 2nd, and 4th on their way to placing the entire varsity roster on the All-District team.

This coming Saturday, November 9, both teams will compete at the OSAA State Championships at Lane Community College. For the Archers men, especially, the expectations are high. Three Archers runners are vying for the top individual spot in the state and the team is expected to compete for the team title.  Senior co-captain Aiden Smith says, “As much as state runner-up (in 2018) was an enormous milestone for the program and for us as individuals, we know we each have more to give.” Two-time champ Cove is back as well, but St. Stephen’s looks to flip the script this year. Coach Tsuei said, “We know that Cove has experienced coaches and runners, and they’ll come ready to defend their title.  We’ve set a goal of scoring under 50 points; we feel that will help secure our first-ever school title in any OSAA sport.”

Whatever happens at the state championships, St. Stephen’s is looking to build on the success of 2018 with the hopes of establishing a winning tradition.  Coach Tsuei concluded, “We’ve learned that we have to dream big in order to achieve big things. I’m thankful for having such a great group of athletes of high character and personal motivation.  These kids are in such an academically rigorous program at St. Stephen’s, yet they prioritize their time so they get in their training. I’m just so glad they’re seeing success. We want that storybook ending this year.  They’ve earned it.”