Posted at 13:27h in Recent by Camrynne Six
Share 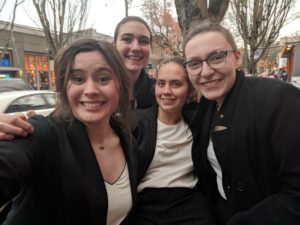 Are you aware that a small contingent of St. Stephen’s students have been passing themselves off as adults? It’s true. Sometimes the greatest truths are discovered through a fiction. Last Saturday morning, near Multnomah County Courthouse, several of our high schoolers were spotted on 4th Street, dressed as professional adults.

Once they gained entrance into the courthouse, the St. Stephen’s Mock Trial Team had the privilege of arguing a criminal case in two rounds of competition. The case was State vs. Durden. Taylor Durden, played by the calm-and-cool Grace J., had been accused of both Second-Degree Manslaughter and Criminal Hazing. As Pledge Master for the Epsilon Sigma Epsilon (ESE) fraternity, Ms. Durden had supposedly forced undergraduate pledge Jessica Bateson to consume excessive amounts of water in a dangerous game called Water Jeopardy. Ms. Bateson had died of complications due to acute hyponatremia, drowning in her own cells after arriving at the hospital in an unresponsive state.

Yet Ms. Bateson herself also had secrets. Perhaps she had suffered from hypothyroidism, a family medical condition which would have exacerbated the effects of all water consumption. Or perhaps, by clowning around, Jessica had knowingly consumed the water in an attempt to gain attention during Pledge Week. One further mystery: why was the ESE president, Alex Richards – played by the indignant Camille C. – sitting at the prosecution table when she had been missing in action throughout the entire game of Water Jeopardy?

Are you looking forward to joining the team (or helping out)? Mock Trial is a heady mix of law, science, civics, American culture, philosophy, and rhetorical skill, and the St. Stephen’s Academy team credibly represents St. Stephen’s Academy in two competitions each year: Mini-Mock (November) and Regionals (February). This year, the team aims to win Regionals in order to participate at the State level in early March. We have an exemplary roster this year; they would convince even a skeptical adult that the rising generation is not about to waste their Constitutional inheritance. These kids have learned to care about Truth, and they have also learned to speak it.