Posted at 20:50h in Recent, Uncategorized by Camrynne Six
Share

The spring 2021 Archers Track & Field team finished their whirlwind journey through a shortened season that included competition at meets in new places, hosting two meets and a 1A State championship meet at Eastern Oregon University this past Saturday May 22. The Archers sent 11 athletes to compete in 7 events in La Grande and came away with three individual titles, a 2nd place, a 3rd place, and a 5th place finish. or nine of these Archers athletes, this was their first time competing at a state championship meet. 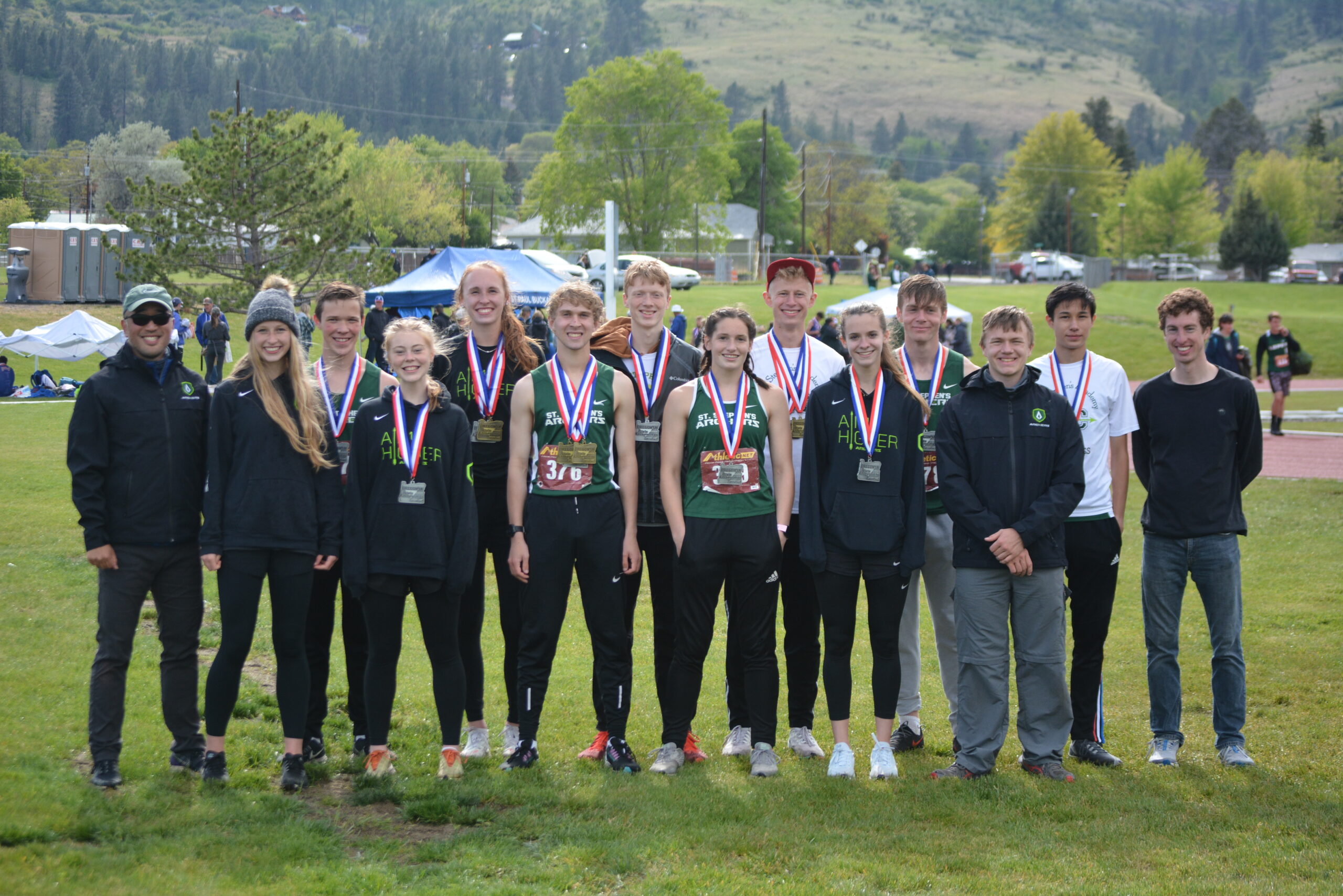 The 2021 season was an exercise in scrambling to find regular season meets where the Archers could compete, as most meets were limited in participant number. The team traveled to St. Paul, Knappa, and Perrydale in the short 6 week season, as well as hosting 2 meets at their home track for this season, Life Christian in Aloha. There was a throwers’ only meet in Tigard sandwiched in the middle of the schedule, but all of these meets were important in this COVID-altered year. Regular season performances were used to determine qualifiers for the State meet. The Archers headed to LaGrande to compete in the women’s 1500m and 800m, the men’s 3000m, 1500m, and 800m as well as both men and women’s 4x400m relays. “I give a ton of credit to Coach Joseph,” said head coach Tim Tsuei. “With the added burden of finding meets, handling COVID protocols and managing physically-distanced training squads, I asked Coach Pia to take over the programming for the middle and long distance athletes. He really had them dialed in for the State meet.”

For junior Olyvia O., this was her first year running track. She ran cross-country in the fall for three seasons, but she took to the track oval like a natural. She was undefeated in the regular season in the 1500m and only came in 2nd in one of her four 800m races before State. She entered the State championship meet ranked first in the 1500 and second in the 800. At the State meet, she opened the meet with a new personal record (PR) in the 1500m, breaking a 5-year-old school record and capturing the individual title in the women’s 1500m. 90 minutes later, Olyvia toed the line for the start of the 800m. “She was in 7th place after 200m and I was a bit concerned,” recalls Coach Tsuei. “But Olyvia passed three runners in the final 200m to finish third… a really gutsy race!” Olyvia also anchored the women’s 4×400 team with Geneva S., Karlyn S., and Kaylinn J. Amelie O. was ready as an alternate in case of injury during the meet.

Seniors Luke W. and Seth B. finished their high school track careers with good showings. Luke, in his first state meet, competed in the 1500m and 3000m. He finished 5th in the 3000m to make the podium. Seth won the state title in spring 2019 in the 800m after competing in both the 3000m and 1500m in previous State meets. He entered the 2021 1A championships hoping to close out his senior year strong. Seth finished 5th in the 1500m and 2nd in 2:00.64 in the 800m, despite nursing a foot injury. After these strong efforts , Seth had to opt out of the 4x400m relay; strategically, freshman Caleb F. was ready as an alternate to take his place, running leadoff for the relay team of Gabriel M., Colin F., and Jonathan S. Gabriel also competed well in his first State meet, finishing 9th in the 800m with a new PR. “One of the best things about the State meet was getting to take so many first-year runners. They got to see what it’s like. I’m already getting requests for training programs for the off-season, because the younger runners want to get back there next year!” said Coach Tsuei.

Entering the 2021 State meet, expectations were high for junior Colin F. Colin finished 5th overall in the state in the Archers’ XC championship season in fall of 2019 and he also was the individual winner in the fall 2020 Christian School COVID league championship. The last time he was at a state track meet, he competed as a freshman and finished 8th in the 3000m. But in this track season, Colin’s regular season results had put the rest of the state on notice that he planned to win the 1500m and 3000m. He set a new school record in the 3000m in the first meet of the season, and then a new school record in the 1500m in early May. Going into State, he was the top seed in both events. Colin ran both races masterfully; he won the 1500m by 5 seconds and then won by the same interval in the 3000m, setting another new school record in the latter event.

When the final race was done, the Archers men had accomplished an unprecedented feat. Even though they only competed in 4 running events, they earned 39 team points to finish 5th overall in the team competition. The Archers men’s team best previous finish was in 2016 with 21 points for a 9th place finish. 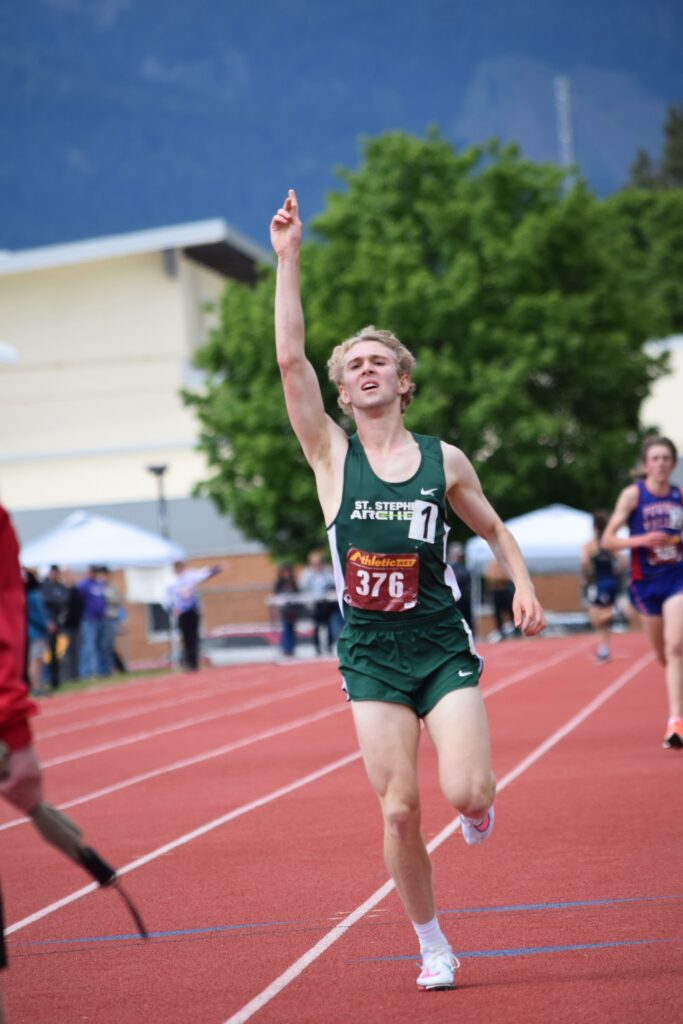 As so many have said before, it really is a memorable year. But there have been good memories created in the past year along with the sadness and sickness and loneliness. The Archers Track & Field team has been one of the bright spots for the athletes and families and coaches represented. “We’ve talked about a lot of things as a team, on Zoom or in person since we shut down the spring 2020 season last April,” Coach Tsuei recounted. “In our last meeting in that canceled season, we said that we would ‘take care of the things in our control, trust God for the things we couldn’t control, and we’d work on our reactions and our responses to everything.’ The athletes did that when we were able to start this season a year later. They ran and trained and threw and lifted as much as they were allowed to, with whatever restrictions we had at the time. But in this season, especially at the end, we started praying at practices and at meets that God would help us to turn the glory back to Him. We knew that this sport could bring individual glory for winning events, but like no other season before, we also realized as a team, that our health and the opportunity we have to train and race together was a very fragile privilege. So, all the glory goes to God.”

As the state meet drew to a close last Saturday, the men’s 3000 was one of the final events. Colin ran a great race with a competitor literally on his heels for all but the last lap when Colin outkicked him to set the final margin. As Colin crossed the finish line, he pointed to the sky, which was somewhat atypical. Asked later why he did that, Colin said, “I was saying ‘all glory be to God for the win.’ Without Him and the strength and health and drive He gives me day in and day out, I wouldn’t be where I am today.”