Archers XC Men Hit the Mark at the State Championships

Posted at 17:58h in Recent, Uncategorized by Camrynne Six
Share 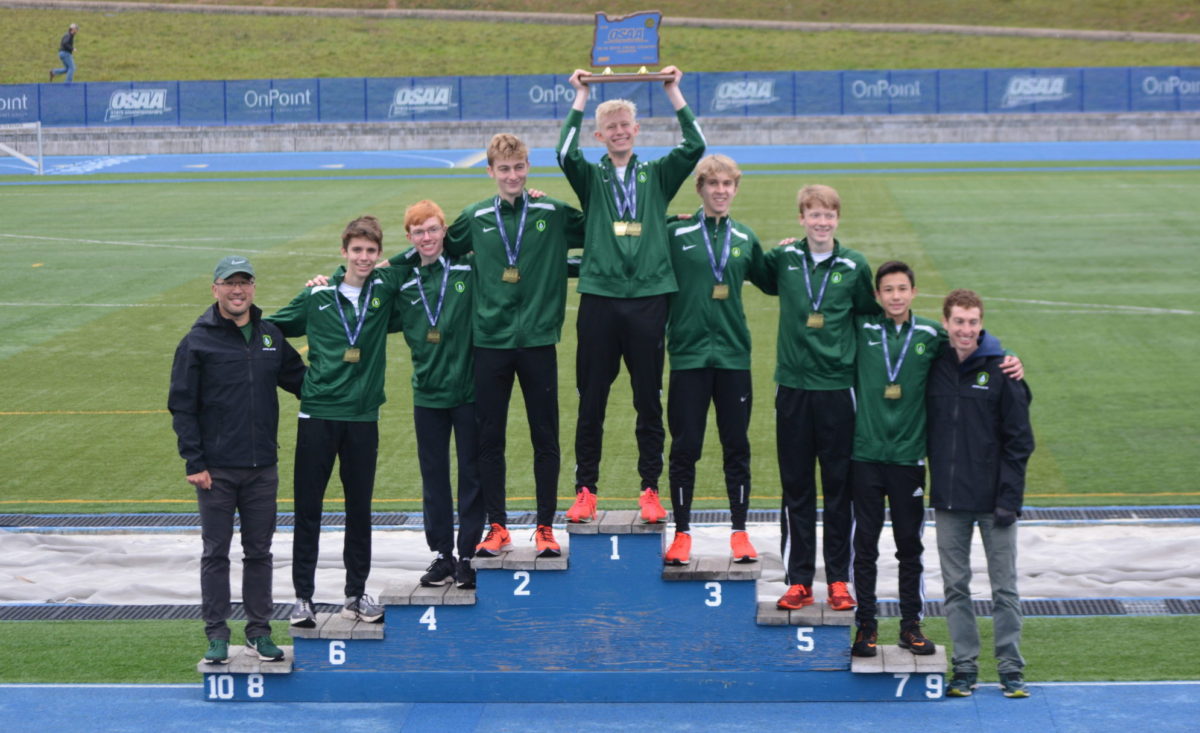 When newfound success comes to a sports program, the larger stage can either swallow up the athletes, or the athletes can rise to the challenge. On Saturday, November 9, both the men’s and women’s cross country teams from St. Stephen’s Academy (Beaverton) arrived in Eugene for the 2019 OSAA State Championship cross country meet. While this was the women’s first-ever trip to the State meet, the men arrived confident and ready, having debuted with a state runner-up finish in 2018 in the 1A/2A division. The Lane Community College course, setting, and pageantry were familiar, and the men seemed ready as they ran their customary strategic jog of the course to get ready for the battle ahead. Freshman Gabriel Morrow was asked later how things felt at the starting line: “We were pretty confident. We’ve been doing well, training hard together.” In the final starting line team huddle, senior co-captain Aiden Smith exhorted the team, “We deserve this. We’ve been working hard all season. I expect to see all of us at the finish line with nothing left. Leave it on the course!”

The race plan was for all the Archers men to get out quickly in the first 100m to avoid any trouble in the crowded field, and then to settle into their target splits for the first mile. All seven Archers came through the first mile just a bit faster than their target paces with Seth Bergeron, Aiden Smith, and Colin Friend in the lead pack, running a 5:05 pace. At the two mile marker, the team standings showed St. Stephen’s leading with 42 points, headed toward their team goal of scoring under 50 points. Coach Tim Tsuei said, “As the race unfolded, I could see all seven of our guys executing our race plan to perfection. ‘Start fast, settle into a rhythm, and then start moving up with a mile to go.’” The #4-#7 Archers runners were especially performing faster than anticipated, which just heightened the excitement as the runners exited the pond area for the final 300m sprint to the finish.
Coach Tsuei recounts, “I was standing near the final entrance to the track and Seth went by me in the low 15’s with the second place runner a good 30m behind him. I knew he had a shot at breaking 16 minutes and he crushed it with a 15:50.5 finish for first place. Then Aiden came through, unchallenged, for 4th place. Colin had a good battle for 5th place with a runner from Bandon, but he was set up perfectly. Colin went past the Bandon kid on the final curve, pulling away to secure 5 points for us.” The other Archers came flying through the finish line in similar closing fashion. Unusual for the state championship course, five of the Archers set new personal records for the 5k with all seven finishing under 18 minutes. As a team, the Archers men ended up with 42 points, beating second place (and defending champion) Union/Cove HS by 47 points.

This is a very meaningful milestone for the Archers athletic program at St. Stephen’s Academy. This is the first statewide title for the high school, in any sport. Junior Luke Williams explained, “For our school’s size (51 students), and how much work and dedication we’ve put in this year, this just really means a lot to our school.” It seems, though, that the rise of this team has come primarily from a healthy team culture, more than just raw talent. State champion Seth elaborated in a post-race interview, “The XC team culture is something we’ve worked really hard at. It really is a team sport, and you don’t score well if you don’t work together. It’s about pushing each other; we’ve learned how to run with each other in practice and in the race. Pushing each other to be better, together; that’s been the big driving force.” Senior James Adams added, “The team culture started in the summer. We’ve built on it all the way to this point.”

Not content for this team to be a once-in-a-generation success, the Archers want to build on this first championship. While 2019 will always be remembered for this first title breakthrough, and while these seven young men may never forget this accomplishment, the team wants more. Sophomore Colin Friend is confident: “The success of this program is something that’s going to continue to develop. Our success isn’t just for this year; expect to see us back here next year.”

The Archers were effusive with their acknowledgement that this was a community accomplishment, praising both their fans and their coach. Aiden said, “Coach Tsuei has been the driving force, especially this season and last season. He’s really pushed us in a lot of ways, and not just in running.” After the awards ceremony and the presentation of the championship trophy, senior co-captain Colton Six spoke passionately, as he looked over the crowd of Archers faithful gathered near the Lane Community College track, “Our school shows a lot of support for our team, with an amazing group of fans. This was our race today.”

Looking back over the championship day, and the season that was, Coach Tsuei tried to sum up his feelings. “This team, both men and women, just bought into everything. Commitment, dedication, respect and love for one another. I do think we are starting something special here at St. Stephen’s. We want to build a program of excellence and not just a team for a season. But this one… this is very special. I’m so happy for these athletes getting the reward for a summer and long season of hard work.”